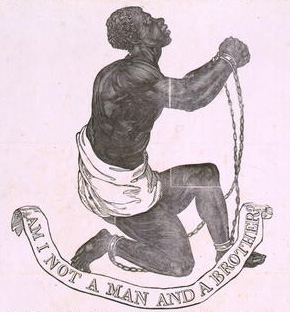 Welcome to Mr. Engle's course on Slavery in America! I hope you are ready to explore one of the darker periods of our nation's history which led to conflicts that almost tore our country in two. After taking this class you will have a better understanding of slavery's role in the history of the United States, how some of the time period's best minds attempted to avoid conflict and the reasons that people opposed or supported this "peculiar institution". We will be working with primary sources, videos, and maps to help you better understand how slavery helped build our young nation and how in attempting to realize our founding father's belief that "All men are created equal" the United States fought a brutal and bloody civil war.

To my fellow teachers who may be looking at this course, it has been designed to help students get a better understanding of slavery in the United States and how conflict over this institution led our nation to Civil War. As middle school social studies teachers know, 7th and 8th grade social studies share a state test at the end of the 8th grade year. Often, the break in content between the two grades occurs just prior to the Civil War. The idea behind this class was that it could be used as a review for students while they are on summer break so they come into fall ready to jump feat first into the war or it could be used for students who are newly transferred into the district and need to catch up because their district left off at another point in history.

I tried to vary the instruction in this class as much as possible. I included reading, video, primary sources and maps to help students gain a better understanding of slavery. I intentionally included many DBQ style resources and graphic organizers to give students practice doing historical analysis. The 8th grade test is heavily weighted by the DBQ sections and the more practice students have in this area the better.

To get a more detailed idea of why I created this course, feel free to look at my portfolio where I outline the creation of this topic.

This course is meant for you to learn about Slavery in America and the conflicts it caused which eventually led to the Civil War. It is designed in a way that you do not need to know much about the time periods that came before the 19th and 20th centuries in America. The only prerequisites you will need are as follows.

By the end of this course you will be able to

At the completion of this course you will complete a project that will allow you to demonstrate your understanding of slavery in pre-Civil War American and how well you analyze some of the issues and opinions that surrounded the debate. Because you will be using information that you collect throughout the course, take a few minutes to look over what will be expected of you in the final project.

Unit 3: The North and the South View of Slavery

This section offers lots of great resources to help you in your project and learn more about slavery in America. Have fun exploring!