Lesson 2: What was most valuable to Athenians?

Directions: Look up each term in the textbook (pages 128-130) and define each term in your social studies notebook. 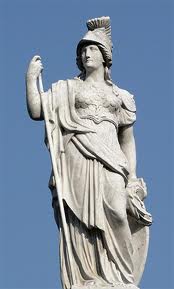 While Spartans valued military strength, Athenians placed a higher value on education and culture. Their main goal was building a democracy. Athenians believed that the only way to build a strong democracy was to create well informed citizens.

Girls were not educated.

Athenian government began as an oligarchy. A rebellion against the nobles by unhappy farmers resulted in a democracy. The farmers, some that had become in debt or even slaves to nobles from borrowing money, wanted their freedom. They also wanted the land owned by the nobles to be shared with the poor. They wanted a say in government.

Solon 594 BC: He was trusted by both farmers and nobles to solve the problems between the two groups.

Cleisthenes 508 BC: He came to power and is credited with turning Athens government into a democracy.

Click the link below to learn about Life in Athens

Lesson 3: What brought Sparta and Athens together?