Lesson 3: What brought Sparta and Athens together?

The Persians were a group of nomadic warriors. They were once dominated by others until Cyrus the Great united them into a powerful empire.

The Greeks continued to set up colonies throughout the region. They often had conflicts with the Persians. Persians had taken over Greek territories in Asia Minor. Athenian armies helped the Greeks rebel against the Persians. The Persian King, Darius, saw Greeks from the mainland (the largest Greek island) as a threat to his empire. Darius decided to stop the Greeks from interfering.

Xerxes, son of Darius, vowed revenge against Athenians for the Battle of Marathon. He begins a new invasion of Greece with 180,000 soldiers, thousands of warships, and supply ships. The Greeks decide to join forces to fight the Persian threat. Sparta sends the most soldiers led by King Leonidas. Athens provides the navy. Athenian General Themistocles comes up with a plan to attack Persian ships and cut of the massive army's supplies. 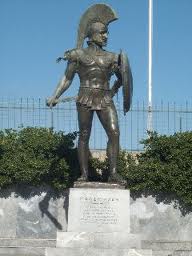 The Battle of Plataea in 479 BC united the Greek armies and ended the Persian invasions of Greece. The unification of the city-states of Greece did not last long.