1. Understand the balance of energy flow between the sun and the earth

2. Understand the concept of greenhouse effect and its implications

3. Know the circulatory route of carbon (CO2) on the earth

Activity I: Flow of energy between the sun and the earth

Students will be asked to recall/introduce concepts and theories of heat transfer:

3. Incoming radiation can be both absorbed and reflected. E= Eabsorbed +Ereflected

Based on these concepts, let’s look at the cartoon of the energy flow between the sun, the atmosphere and the earth surface:

This is a simplified model, students will be further asked to calculate:

2) When the earth surface absorbed the energy (being heated), it will radiate the heat by radiation in the infrared wavelength (long wave radiation). When the atmosphere receives such radiation (a very small portion will pass directly into the space 40 W/m2), it will absorb the majority and reflect some back to the space. (195 W/m2).

Let student calculate the total radiation reflected back to the space:

The energy in and out of the earth is balanced here!

Why it is (needs to be) balanced? Students will be challenged to think about this problem?

Answer: This allows the Earth to maintain a constant average temperature over time.

Scientists discovered some particular gases in the atmosphere can capture and then re-emit the infrared radiation back to the earth surface. These gases include: water vapor, CO2, CH4 & O3. Thus, the presence of these gases results in the earth surface receiving more radiation than it would were the atmosphere absent; and it is thus warmer than it would otherwise be. This mimics the function of a greenhouse and therefore, these gases are called greenhouse gases and the phenomenon is called the greenhouse effect.

This process is a natural aspect of the Earth's environment and is important for keeping the temperature on Earth at a normal level. (Not bad at all!) However, if the greenhouse effect is enhanced by human activities, the increasing of the concentration of greenhouse gases will increases the amount of absorption and re-radiation, and thereby further warms the surface below. This is the major cause of global warming.

Activity II: In and Out: the circulatory route of CO2

Human activities are generating tons of CO2, most of which are from burning of fossil fuels.

CO2 is also being taken by the nature: 1. Plants absorb CO2 and generate oxygen during photosynthesis. 2. CO2can be dissolved into water: CO2+H2O⇔H2CO3⇔H+ + HCO3⇔H+ +CO32-

Which is more powerful? How is CO2 recycled on the earth? Still remember the pretest problems? (The fulfill and drain of a swimming pool). For CO2 circulation, the earth could also be viewed as a swimming pool, or a bathtub, which we use to describe system dynamics.

Please look at the bathtub model for CO2 circulation. 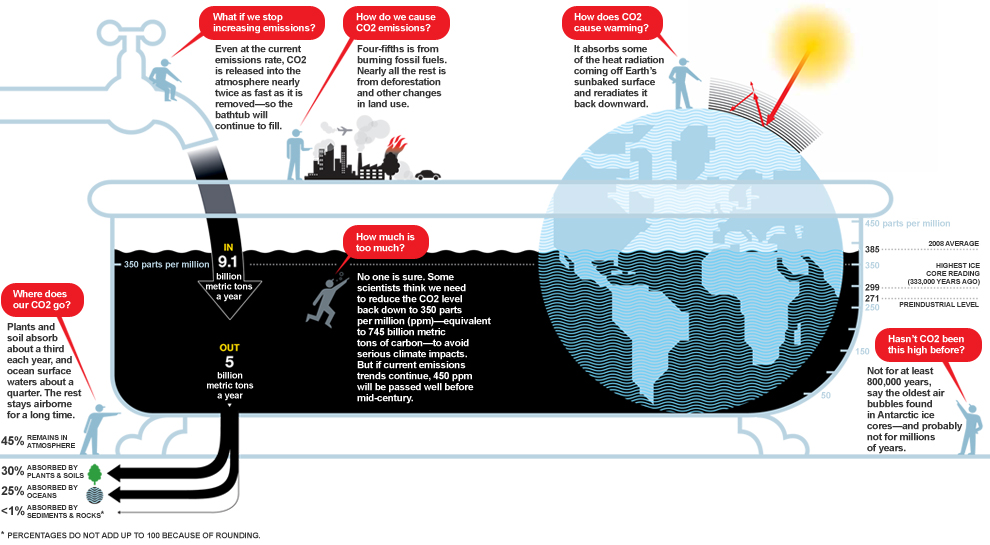 We could find that the total CO2 is way off than balance, the equilibrium has been broken. Each year, a 4 billion metric tons of CO2 will remain in the atmosphere, which leads to a dangerous level of CO2 (450 ppm) in less than 50 years, given we do not take any actions to reduce pouring CO2 into the atmosphere.

What’s worse lies on that the rate of absorption ad fixation of CO2 by oceans and plants is constant and unfortunately, very slow. In this scenario, turn off the tap can be achieved by reducing a substantial cuts in emissions from cars, power plants, and factories. Once the inflow is balanced with the outflow, the CO2 level will not keep increasing. However, it will cost nature very long time to reduce the increased CO2 level in the atmosphere back to normal.

We now know that the imbalance of CO2 flowing in and out to the atmosphere leads to the accumulation and then huge increase of CO2 level in the air. Meanwhile, because the absorption and fixation of CO2 is very slow, it will take several hundred years for the nature to eliminate the extra CO2 in the atmosphere. Based on the three ways CO2 is absorbed, can you give helpful suggestions to accelerate this process?