How is it possible that this...

Well, they are. As you and your students progress through this course the answer to this question will become clear... 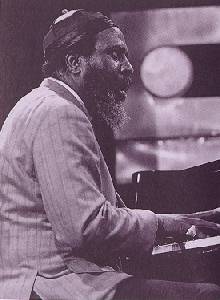 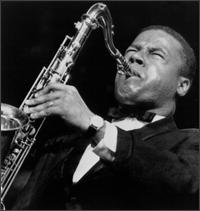 Pianist Thelonious Monk (1917-1982) and tenor saxophonist Wayne Shorter (1933-) (pictured above, respectively) represent two of the many musicians that are also extremely utilized composers for the jazz idiom. Monk was a co-inventory of the style known as be-bop in the 1940s. His works are, like most jazz pieces, are characterized by "short" pieces, compositions that are only 16 to 32 measures long. Monk did not compose extented works for large ensemble. Monks songs are characterized by angular rhythmic devices and melodic dissonance.

Wayne Shorter's compositional output was most prolific in the mid 1960s. The majority of his timeless compositions were recorded on his own albums under the Blue Note Record Label. Like Monk and most jazz musicians, his compositions also follow the popular song form of being a repetition of a 16 to 32 measure long song. They are characterized by moody, mysterious melody combined with driving accompaniment.

Regardless of the time period a work of jazz has or is being performed, the performer may choose to play a work of a composer of a previous era or a contemporary. To determine whether a composition was composed by a jazz specific composer in current practice is relatively simple. If a jazz musician is performing a work written by himself or a peer, the piece was created by a jazz specific composer.

In terms of jazz compositional interpretation, embellishment and improvisation are key elements of musical communication in jazz. Merriam-Webster defines embellishment as the act of embellishing: "to heighten the attractiveness of by adding decorative or fanciful details." Encyclopedia Britannica on-line defines improvisation in music as defines improvisation as "...the extemporaneous composition or free performance of a musical passage, usually in a manner conforming to certain stylistic norms but unfettered by the prescriptive features of a musical text."

The second library of musical works, those of the popular song composer, has within the last forty years, seen a reversal of progress as compared to the jazz specific composition field. With the rise in popularity of the Beatles in the mid 1960s, the popular songs of the day resemble contemporary jazz less and less. The popular music of the day in the first half of the twentieth century was and still is the foundation of the jazz repertoire. Songs from radio, Broadway and motion pictures, popular with the general public, were utilized by jazz musicians as a springboard for embellishment, improvisation and rhythmic reinterpretation ( also called "swing"). For the musician, this worked to their advantage. The harmonic structure of these popular songs were as complex as jazz can allow, making for stimulating material development for the improviser. The original melody is left relatively unchanged in performance to draw the listener in by retaining previously known base structure to the ensuing improvised variations.

The most popular songwriters of the first half of the twentieth century are those whose songs form the basis of the jazz canon. These composers include Broadway music composers Rodgers and Hammerstein, motion picture and popular song composer Irvin Berlin ("White Christmas"), Hoagy Carmichael and the main focus of this unit, George Gershwin (1898-1937), shown below.

George Gershwin was born at the turn of the century in Brooklyn, NY to Jewish immigrant parents. Before dying at the age of 39, he scored hundreds of works including numerous Broadway musicals and films (including Porgy and Bess, Girl Crazy , An American In Paris) , classical works (An American in Paris, Rhapsody in Blue) and many popular songs (Fascinatin' Rhythm, Embraceable You, I Got Rhythm, etc.). All of Gershwin's output was heavily influenced by jazz and in turn has been a foundation of the jazz songbook, Gershwin is also the only composer in history that has had a successful career in both the classical and popluar music worlds. For a very colorful and musical look at George Gershwin, additional information can be found at this site: [3]

As the main focus of this course on jazz we will be to analyze different interpretations of his piece "I Got Rhythm." The piece follows the traditional song form of "AABA", with the letters A and B each representing different musical material and each A and B being eight measures each.

You will listen to each video clip. As you hear the original version performed by Gershwin reflection or identify and write down your responses (do not skip ahead to the next video clip!)...

As you see this interpretation reflect and identify from the following questions...

The following questions you have addressed during this lesson can be used verbatim as a scaffold for understanding and discussion in your own classroom. The goal of this course is to acclimate a general music middle school teacher to jazz.

In the following units we will examine the same song, "I Got Rhythm," in successively more drastic interpretations.

Go ahead to Unit 2 Performance/Interpretation Practices

Back to Jazz in the General Music Classroom