Many commercial vehicles such as buses, locomotives, ships, and trucks are powered by diesel engines ("Use of Diesel," 2017). In order to understand the economical and environmental impact of using diesel fuel to power these modes of transportation, pupils must first learn why diesel engines are used in commercial applications and how they are fundamentally different from conventional gasoline engines. In this unit, students will explore the basic principles behind diesel engines and how they differ from gasoline engines.

Why Are Diesel Engines Used in Commercial Applications?

Diesel engines are used in commercial vehicle because they are extremely efficient. This is because they operate through the compression of air, and thus this engine technology is not susceptible to the problems associated with pre-ignition like their gasoline counterparts. The energy output present during the idling of a diesel engine is also superior to the energy output of a gasoline engine in the same state ("Diesel Engine"). 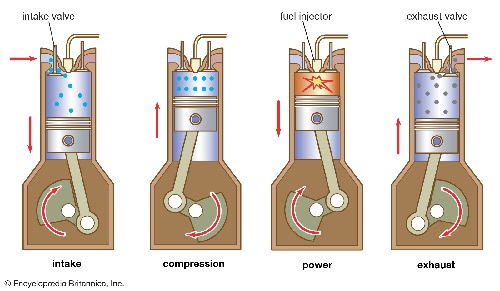 The compression cycle of a diesel engine ("Diesel Engine," 2008).

Please watch the following informational video regarding the operation of diesel engines: https://www.youtube.com/watch?v=DZt5xU44IfQ

The Principles Behind a Four-Stroke Diesel Engines

Diesel engines traditionally use a four-stroke cycle. On the first stroke, clean air is drawn into the combustion chamber. The air is then compressed by the piston, and a fuel injector introduces atomized fuel into the combustion chamber. On the third stroke, a small uncontrolled explosion occurs in the combustion chamber, and the piston is forced downward. This transfers energy to the crankshaft of the engine. The third stroke of the cycle is referred to as the power stroke because the energy stored in the fuel is transformed into mechanical energy. Finally, the piston moves up in the chamber and the exhaust gases are expelled ("Diesel Engine, How it works ?" 2014).

It is important to note that "the combustion process in a diesel engine is heterogeneous." This means that the fuel and air are not mixed prior to the initiation of combustion. This is one of the key differences between gasoline and diesel engines ("Diesel Engine," 2008).

Please watch the following video for a comparison of diesel and gasoline engines: https://www.youtube.com/watch?v=bZUoLo5t7kg

When viewing the video, please think about the disadvantages of using diesel engines in light-duty applications. You might want to compare and contrast a ride in a school bus and a ride in a passenger car as a starting point for your analysis.

2. Why do commercial vehicles use diesel engines?

Answer: The main reason is efficiency. They operate on the basis on compressed air, so the combustion is more predictable than the combustion of gasoline in a petrol engine. When idling, the energy output of a diesel engine is greater than the power produced by a comparable gasoline engine.

3. Discuss a reason why diesel engines are not common in small passenger vehicles.

Answer: In a diesel engine, the combustion occurs in an uncontrolled manner. This means that the fuel can ignite when the piston is at any position after it is introduced into the combustion chamber. This causes diesel engines to be louder and vibrate more than a gasoline engine. This characteristic makes them undesirable in most small-scale applications.

“Use of Diesel.” Diesel Fuel Explained, 30 May 2017, www.eia.gov/energyexplained/index.cfm?page=diesel_use.