2. Understand different views and policies towards global warming in developed and developing countries

3. Know different attitude towards global warming and its rationale

Activity I: From Kyoto Protocol to Copenhagen Summit

Global warming has brought the attention of both scientists and politicians around the world. After realizing its potential impacts on natural and social system, leaders from different countries urge to have meetings to discuss this issue and corresponding solutions. (Why? Because it’s a global issue, not a regional one!)

The protocol assumes that human activity is a major cause of global climate change. The treaty try to establish a legally binding international agreement, whereby all the participating nations commit themselves to tackling the issue of global warming and greenhouse gas emissions.

The Kyoto Protocol has set 2010 emission targets for a group of developed countries. To further discuss and develop a framework for climate change mitigation beyond 2012, Copenhagen Summit was held in Copenhagen, Denmark, 2009.

Outcome: The Copenhagen Accord recognized that climate change is one of the greatest challenges of the present day and that actions should be taken to keep any temperature increases to below 2°C. However, the document is not legally binding and does not contain any legally binding commitments for reducing CO2 emissions.

The accord itself is not legally binding. No decision was taken on whether to agree a legally binding successor or complement to the Kyoto Protocol. The accord sets no real targets to achieve in emissions reductions.

Look back to the Kyoto Protocol: This protocol does not set limitations for carbon emission for developing countries. Why different commitments are adopted here? Is this fair or unfair?

We should acknowledge following facts:

2) Per capita emissions in developing countries are still relatively low 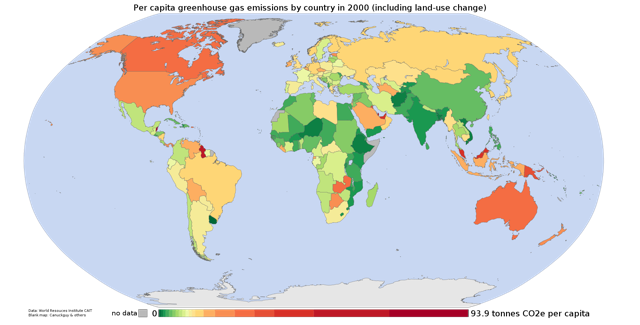 There’s a dilemma between the reduction of industrial emission and the development of economy and society.

99.5% percent of scientists understand and appreciate the greenhouse effect. When the topic turns to whether or not human activities cause the rise of temperature, some scientists do not agree increasing level of CO2 should be attributed to the major reason of global warming. Reasons for that are listed below:

There have been periods when increased heat from the sun probably made the Earth naturally warmer. The weather was warmer during the time of the dinosaurs, millions of years ago.

Very large fields of ice cover 3 percent of Earth's surface including most of Antarctica and Greenland. Because ice is highly reflective and because of its insulating properties, ice plays an important role in regulating the Earth’s temperature.

All of these natural factors have played a role in changing the climate from hot to cold to hot again. Many times. Long before humans walked the Earth!

1. Given you are a deputy of a big developing country, please prepare a draft for your short speech in Copenhagen Summit to present your responses/actions towards global warming with arguments representing real situations in your country. (300 words). Good examples should include possible solutions to this issue instead of merely avoiding taking any responsibilities.

2. What are (will be) strong evidences to argue with scientists who do not believe human activities cause global warming? (Extra credits will be given if more than 3 evidences are well supportive)