1. Understand global warming will have significant impacts on natural, ecological and social systems.

2. Understand the impacts on different systems are internally and logically related.

We now know that global warming is happening. However, why it becomes a particularly important topic that brings attention of scientists and politicians all around the world? Because it will (and is causing) cause some drastic effects to the earth. Let us first aim at the changes of natural system caused by global warming.

A. Impacts on natural system

1) The frequency of hot extremes, heat waves will very likely increase, which will lead to increased area of severe drought.

3) There will be increased intense extreme weather (hurricanes, tornadoes) activity

B. Impacts on ecological system

It is expected that most ecosystems will be affected by higher atmospheric CO2 levels, combined with higher global temperatures. Overall, it is expected that climate change will result in the extinction of many species and reduced diversity of ecosystems.

For example, the marine ecosystem: the ocean is more acidic and less oxygen will be dissolved into the water. pH and oxygen level are critical to most animals, thus a great number of marine species will extinct.

Students will be challenged why the ocean will be more acidic and deoxygenized?

1.More CO2 in the atmosphere will favor the reaction direction to dissolving. Dissolving CO2 in seawater increases the hydrogen ion (H+) concentration in the ocean, and thus decreases ocean pH. (recall the equilibrium equation of CO2 dissolving).

2. Higher temperature could lower the solubility of oxygen in the sea water.

A special case for marine mammal is polar bear, please see the video below: 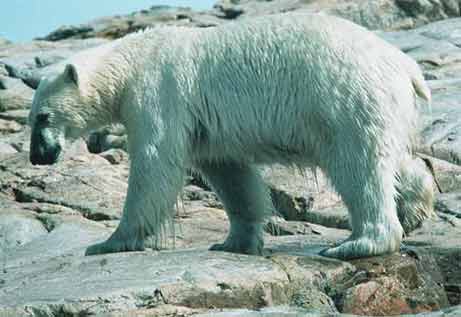 Changes on both natural and ecological systems will eventually have significant impacts on social system, which will influence life of very big populations.

Dry regions & Places depending on snow and ice melt

Students will be challenged why?

Because both Yellow river and Yangtze River origin from the melting water of Ximalaya glaciers.

Climate change will impact agriculture and food production around the world. In low latitude, such change will lead to very low productivity.

Stresses such as increased drought, water shortages, and flooding would affect many local and regional populations. (See how changes of natural system could affect social system here!) It is very likely that these stresses would lead, in some cases, to relocation within or between countries. This might have the effect of exacerbating conflicts, and possibly impose migration pressures.

See how sea level rise could affect geographic characteristics of different countries and think about what does this imply!

Please use you creativity and imagination to write an essay based on what you've seen by the prediction program of sea level rise.

Title should be: What will happen if the average sea level rises 7m?

1. You should describe the geographic changes caused by such sea level rise of at least 2 countries in the world (America must included)