The Decoding Process in Action

Here is an example of a media document that could be used for a decoding process activity in a social studies classroom. I included a media document, as well as questions that I chose from the suggested list created by the National Association for Media Literacy Education. I gave justification for each question to why I chose it. Please note that there is no "right" question to ask. Teachers need to use their best judgement. Teachers can also ask follow-up questions of their own after asking one of the NAMLE questions for even a deeper understanding or to make connections with other topics.

In this lesson, students will be learning about when the Germans invaded the Soviet Union in 1941, one of the early movements of the Soviet Union in World War II was getting as many Russians to join the army as possible and helping them understand that they were fighting for the future of Russia just as their ancestors did many years before. Propaganda posters were put up all over Russia and this one shows Russian soldiers going into battle. Hovering over them in the sky are important figures in Russian history such as Alexander Nevsky and Dmitri Donskoi. These men are honored in Russian history like we honor people in America, such as George Washington, Abraham Lincoln, and FDR. The main point is to motivate Russians in fighting against the Germans. 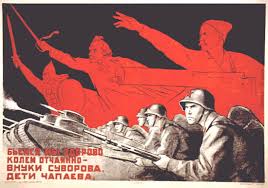 What do you think this is from? In this case, it will be sort of obvious to many student that this is from Russia during World War II. I suggest that this is asked just to make sure everyone is on the right track.

Who do you think the target audience is? This is a question that I believe should be asked for all decoding processes. Target audience is a basis for every type of media document whether it is in a classroom, a commercial, a newspaper ad, etc.

What did you feel when you first looked at this poster? I chose this question because it allows students to express their own feelings and thoughts about this. When this question is asked, you'll see a lot of different perspectives since all students' minds are so different.

Is there information that is omitted? If so, what is omitted? This question is very appropriate for this propaganda poster. Students will have learned that the war conditions at Stalingrad were awful. Soldiers were often ill-equipped, shot by their own military officers, and if you were put on the front line during this battle, you essentially had no chance of survival. I want to get students to think and make connections between what the poster shows and what the actual battlefield conditions were.

What might a Russian civilian's impression be when seeing this poster? This allows students to put themselves in the shoes of a Russian who sees this poster. I love these kind of activities in social studies and this question should work well just from my experience.

For what purpose do you think this poster was created? This question is essentially asking students the meaning of this poster. The questions asked beforehand should scaffold students to get to this point.

After the last question is asked, a good idea is to conduct an open-ended discussion with the question, “If you were a civilian in Russia during World War II, do you think this document would motivate you to join the Russian army and fight at Stalingrad? Why or why not? “ Students will be able to state their thoughts about it and give reasons to support their feelings.

Back to Lesson 2: The Media Literacy Education Decoding Process