Note: I you wish to practice your skills learned in this unit please access this site for an opportunity to practice chord building and identification.

For the answers to the questions below, please click "Expand" in the upper right hand corner of the question box.

It is with inverted chords that the difference between "bass" and "root" becomes incredibly important. For example, the E-G-C arrangement of a C Major chord discussed above would have E as the "bass note", but retain C as the "root" of the chord. See the illustration below for the three possible "positions" of a C Major chord.

Inverted chords often have the exact same function as their non-inverted counterparts. For example, a G Major chord in the key of C Major will still tend to resolve into a C Major chord, even if the G Major chord is spelled B-D-G.

The chord map begins with three chords; the tonic triad, the dominant triad, and the leading tone chord. In any Major scale, these chords are built on the first, fifth, and seventh scale degrees, respectively. In C Major, the roots of these chords are C, G, and B, respectively. Using the notes of the C Major scale to build triads on each of these notes results in the following three chords:

These chords are very important to Western music, as they most often form the basis of tonality in music. The tonic triad, in this case C Major, represents "home", or the resting point of music. This is typically where a piece of music begins and ends, "centering" the listener. The tonic triad is represented as I in the diagram below. The dominant and leading tone chords, G Major and B diminished, respectively, are represented as V and vii* below. These chords "resolve" into C Major, the tonic triad, helping to create that sense of "home" by resolving tonal dissonances. This movement from tension to resolution is called a "cadence", and signals to the listener that the music has returned to a natural resting point. The B in both chords, in C Major, wants to resolve a half-step upwards to C. Both of these chords emphasize this tendency of B to resolve to C, and is readily apparent to a listener. Therefore, V and vii* often resolve into I. Either V or vii* can be used to resolve a given phrase or series of chords into I, and this is displayed in the incomplete chord map below. 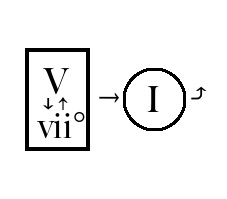 I, being the tonic triad and stable, can move to any chord so long as proper technique is used. This is represented by the arrow coming off of the I chord in the diagram.

These basic relationships only reflect three of the seven chords available based on a major scale. While the Dominant to Tonic relationship displayed in the preceding three chords is very important for tonality in music, it should be noted that a cadence is often "prepared" by means of a chord that functions as a "Pre-Dominant". In the major scale, two chords could possibly function as a "Pre-Dominant", and those chords are ii and IV (In C Major, D minor and F Major, respectively). While these chords are most often used as a pre-dominant, they can also move to the I, tonic, chord first before moving to a Dominant chord. Such a progression is typical, and may manifest as such: ii-I-V-I. Below are the two chords mentioned, as well as a more complete chord map: 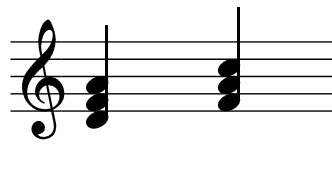 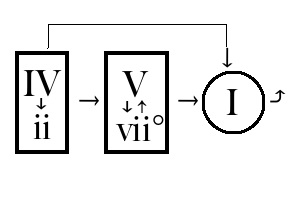 Again, note that I, being the tonic triad, can move to any of the four chords mentioned: ii, IV, V, or vii*.

The final two chords play roles outside of the cadence functions that the other chords play. The chord built on the sixth note in the major scale (in C Major, A) often moves towards a pre-dominant chord, either ii or IV. This chord, vi, typically does not move into a Dominant chord. It possesses the tonic note in the chord, C, which means that dominant chords can resolve into it "deceptively" (V-vi or vii*-vi). The final chord, built on the third scale degree (E), normally moves into the vi chord and, like the vi chord, will not move into a dominant chord. iii can move into the pre-dominant chords (ii or IV) in preparation for a cadence. These relationships are governed by voice leading principles, which will be explained further in the course. Below are the iii and vi chords in C Major, and the completed chord map which utilizes all seven chords based on the notes of the major scale.

Once more, I can move to any of the other six chords.

Proceed below to Unit 2: Voice Leading