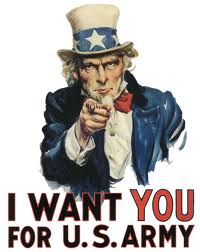 Overview: This lesson would take place in a World War II unit the day following the Japanese attack on Pearl Harbor. The United States officially entered World War II after the attack and was a Total War for America. In other words, every individual must be doing something to assist the war effort. To assist the war effort, the government attempted to get men to join the army and women were forced to take over jobs that men. Also, people were urged to buy war bonds to help fund the war and those bonds would accumulate interest over time. With interest building up, people profited nicely from the original bond they bought however many years earlier.

Preparation/Prerequisites: Make sure key vocabulary words are understood beforehand. A lesson on how America was brought into the war should be taught beforehand as well.

On December 7, 1941, the U.S. was thrust into World War II when Japan launched a surprise attack on the American naval fleet at Pearl Harbor. The following day, America and Great Britain declared war on Japan. On December 10, Germany and Italy declared war on the U.S.

In the earliest days of America's participation in the war, panic gripped the country. If the Japanese military could successfully attack Hawaii and inflict damage on the naval fleet and casualties among innocent civilians, many people wondered what was to prevent a similar assault on the U.S. mainland, particularly along the Pacific coast.

This fear of attack translated into a ready acceptance by a majority of Americans of the need to sacrifice in order to achieve victory. During the spring of 1942, a rationing program was established that set limits on the amount of gas, food and clothing consumers could purchase. Families were issued ration stamps that were used to buy their allotment of everything from meat, sugar, fat, butter, vegetables and fruit to gas, tires, clothing and fuel oil. The United States Office of War Information released posters in which Americans were urged to "Do with less--so they'll have enough" ("they" referred to U.S. troops). Meanwhile, individuals and communities conducted drives for the collection of scrap metal, aluminum cans and rubber, all of which were recycled and used to produce armaments. Individuals purchased U.S. war bonds to help pay for the high cost of armed conflict.

The Role of the American Worker

From the outset of the war, it was clear that enormous quantities of airplanes, tanks, warships, rifles and other armaments would be essential to beating America's aggressors. U.S. workers played a vital role in the production of such war-related materials. Many of these workers were women. Indeed, with tens of thousands of American men joining the armed forces and heading into training and into battle, women began securing jobs as welders, electricians and riveters in defense plants. Until that time, such positions had been strictly for men only.

A woman who toiled in the defense industry came to be known as a "Rosie the Riveter." The term was popularized in a song of the same name that in 1942 became a hit for bandleader Kay Kyser (1905-85). Soon afterward, Walter Pidgeon (1897-1984), a Hollywood leading man, traveled to the Willow Run aircraft plant in Ypsilanti, Michigan, to make a promotional film encouraging the sale of war bonds. War bonds helped fund the war and the buyer gained interest over time. Eventually, the buyer of a war bond could cash in the bond for a profit. One of the women employed at the factory, Rose Will Monroe (1920-97), was a riveter involved in the construction of B-24 and B-29 bombers. Monroe, a real-life Rosie the Riveter, was recruited to appear in Pidgeon's film.

During the war years, the decrease in the availability of men in the work force also led to an upsurge in the number of women holding non-war-related factory jobs. By the mid-1940s, the percentage of women in the American work force had expanded from 25 percent to 36 percent. 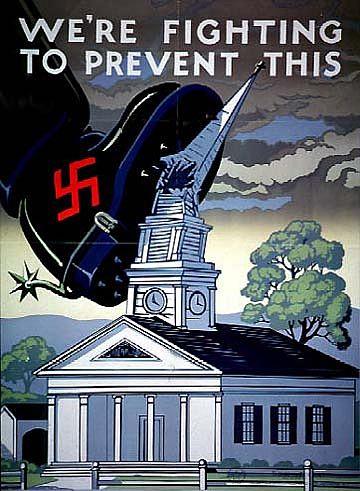 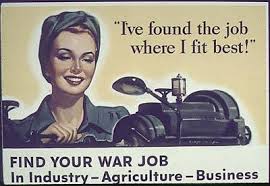 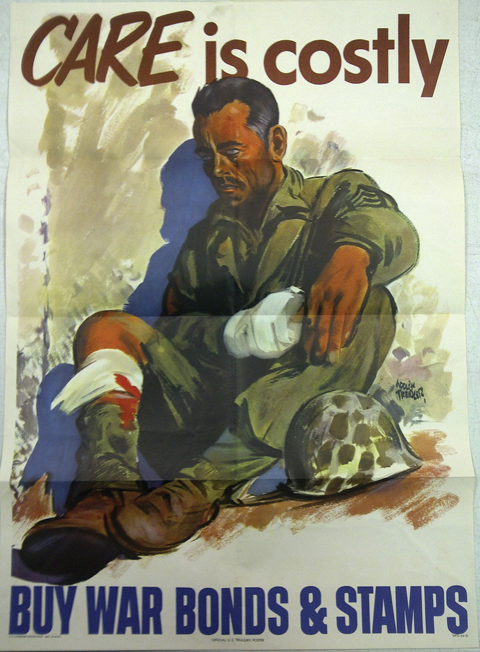 Assessment: A project that requires students to create their own World War II propaganda poster will eventually be given. Students will be required to select a target audience, use techniques that would help persuade their audience, and will be able to explain how their poster would help the war effort when doing a mini presentation. If a student does not want to present their poster, they do not have to. Some eighth graders may be a little shy doing something like this at their age, but it would be good practice for their future.

Extensions: There are other instances where propaganda will be taught during 8th grade social studies. An ideal activity to do would be to compare and contrast WWII American propaganda with Vietnam propaganda. Vietnam was a war where many Americans were feeling that it should be fought, while others were against it so there are countless great Vietnam War propaganda poster. Plus, Vietnam started about 20 years after WWII ended so comparing propaganda from the two eras will be pretty interesting. Another thing I could do would be to compare it to the most recent war in Afghanistan. Students will be able to compare and contrast media between the two and also see how technology and media has advanced since WWII.

Back to: Lesson 3: Applying the Media Literacy Education Decoding Process into Full-Length Lessons