Return to: Unit 3: Engaging in Academics

While the classroom may not be the target objective, an athletes dedication and determination to reach their goals in their sport can be observed. Whether it's the freshman trying to prove themselves on varsity, or the second seed team who always makes it to the championships but loses. As somebody who works with intercollegiate athletes I hear and see the goal setting and motivation daily on the field/court. Coaches are always pushing their athletes to succeed. Parents come to every game to support the kids and instill words of wisdom on how well they did, but where they can improve. The support systems, and goal reaching drives the athlete to continue to aim for success. The next step is using that same energy and determination to be equally successful in the classroom. How can we encourage the development of student-athletes and not athlete students? 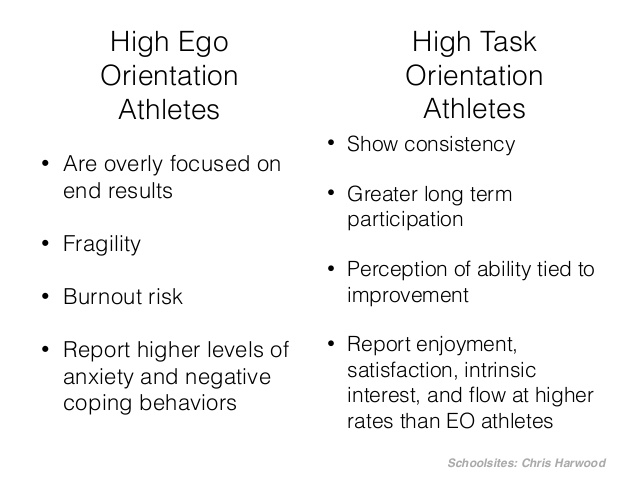 Task Orientation: This student meets success with the development of new skills or the improvement of a personal ability. Somebody how sets out to learn how to ride a bike, or learn to play and instrument is driven by task orientation to set new goals (Curtis, 2006).

Ego Orientation: This student views success as dependent upon one’s superiority over others (Curtis, 2006). This type of orientation is what drives athletes on the field or court. Track athletes constantly striving for a faster time than the other runners in their heat, lacrosse and soccer athlete's striving to be the top goal scorer, goalies wanting the highest save percentage, all can be classified as ego orientation. "Athletes have been trained, from the outset, to set easily definable goals: winning over other people equals success; losing to other people equals failure." (Curtis, 2006). Athletes placed in an environment in which there is little or no competition will be unmotivated to achieve.

Return to: Unit 3: Engaging in Academics