Difference between revisions of "Programming Tool for Children"

Can kids do programming?

Computer programming (often shortened to programming or coding) is the process of writing, testing, debugging/troubleshooting, and maintaining the source code of computer programs. This source code is written in a programming language. This process is often taken as professional work for the computer-program developers. However, this seemly difficult skill has been widely used in education in order to help the students to gain 21st century learning skills and develop a deeper level of fluency with digital technology. Among these programming tools for children, Starlogo, BBB and Scratch are the ones that are widely used and accepted in the field of education at present.

Starlogois a programmable modeling environment for exploring the workings of decentralized systems -- systems that are organized without an organizer, coordinated without a coordinator. With StarLogo, you can model (and gain insights into) many real-life phenomena, such as bird flocks, traffic jams, ant colonies, and market economies. It is developed at Media Laboratory and Teacher Education Program, MIT, Cambridge, Massachusetts, with support from the National Science Foundation and the LEGO group.

This project explores a simple ecosystem made up of rabbits and grass. The rabbits wander around randomly, and the grass grows randomly. When a rabbit bumps into some grass, it eats the grass and gains energy. If the rabbit gains enough energy, it reproduces. If it doesn't gain enough energy, it dies. By changing the initial number of rabbits, the energy level at which the rabbits reproduce, the rate at which the grass grows, one can see the dual osciallations of the total amount of grass and the rabbit population. Such systems are usually described by a set of differential equations known as the Lotka-Volterra equations. StarLogo provides a new way of studying predatory-prey systems and other ecosystems.

This project models the movement of cars on a highway. Each car follows a simple set of rules: it slows down if it sees a car close ahead and speeds up if it doesn't see a car ahead. The project demonstrates how traffic jams can form even without any accidents, broken bridges, or overturned trucks. No "centralized cause" is needed for a traffic jam to form. By setting up the number of cars on the road, the distance that drivers look ahead, the rate at which cars accelerate when there are no cars ahead, and the rate at which cars decelerate when there is a car close ahead, the user can see what elements can influence the forming of the traffic jam. Finally the user will find out that traffic jams can start from small "seeds." Cars start with random positions and random speeds. If some cars are clustered together, they will move slowly, causing cars behind them to slow down and causing a traffic jam to form. Even though all of the cars are moving forward, the traffic jams tend to move backwards. This behavior is common in wave phenomena: the behavior of the group is often very different from the behavior of the individuals that make up the group.

More porjects for education can be found on the offical website of Starlogo[2].Simply follow the links in the navigation sidebar to find models in different categories. Open the models themselves to see the source code for the model, to download the models to your own computer, or to run the models as applets in your browser.

BBB: Beyond the Black Box

The equipments that “are ‘opaque’ (in that their inner workings are often hidden and thus poorly understood by their users) and they are bland in appearance (making it difficult for users to feel a sense of personal connection with scientific activity). 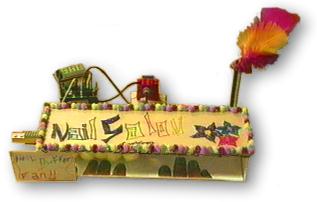 More projects and ideas can be found and shared on the offical website of BBB. [4]

Scratch is a new programming language that makes it easy to create your own interactive stories, animations, games, music, and art -- and share your creations on the web. It is designed to help young people (ages 8 and up) develop 21st century learning skills. As they create Scratch projects, young people learn important mathematical and computational ideas, while also gaining a deeper understanding of the process of design. It is available free of charge and can be download from its official website. [5]

As young people create projects in Scratch, they learn many of the 21st century skills that will be critical to success in the future: thinking creatively, communicating clearly, analyzing systematically, using technologies fluently, collaborating effectively, designing iteratively, learning continuously.

Scratch can used in many different settings: schools, museums, community centers, and homes. It is intended especially for 8- to 16-year-olds, but younger children can work on Scratch projects with their parents or older siblings, and college students use Scratch in some introductory computer science classes.

To learn more about learning with Scratch, creating with Scratch and programming with scratch, just go to the website of Scratch for educators.[6] More research papers and resources can also be found on this page. One can also go to the Educators Forum to discuss ideas with other educators using Scratch.

Acknowledgement: All the information and pictures of the webpage is retrieved from the following websites @ Dec. 3rd, 2008.