Unit 1: Introduction to the Cognitive Theory of Multimedia Learning

What is multimedia learning and instruction?

Multimedia learning refers as “learning from words and pictures” whereas multimedia instruction is defined as “presenting words and pictures that are intended to foster learning” (Mayer & Moreno, 2003, p. 43). In order to develop a deep understanding of the material, it is necessary to consider the presentation of the material, material organization into a cognitive structure, and integration to preexisting knowledge. The broad definition of multimedia in classrooms includes the integration of text, graphics, animation, sound, audio/or video to engage students in constructing knowledge such as PowerPoint presentations created by teachers, concept mapping software used by students, and commercial encyclopedias software for reference and/or instruction.

What is the Cognitive Theory of Multimedia Learning?

Mayer’s CTML describes that words and pictures presented to the learner through a multimedia presentation are processed in two separate channels shown in the figure below.

They enter the sensory memory through the ears and eyes. Words and images are actively selected by the learner from the sensory memory and enter the working memory where they are organized into a verbal model and a pictorial model. Each channel can process only a few “chunks” of information at a given time in working memory (7 for digits, 6 for letters, and around 5 for words, Wikipedia, April 3, 2018). The Vidéo Lecture of Mayer’s cognitive theory of Multimedia learning: [[1]] will help you understand the three assumptions and the priciples of the CTML summarized below.

b) Limited capacity: There is only a limited amount of information processing capacity available in the verbal and visual channels.

(Mayer & Moreno based their model, in part, on The Dual-coding Theory by Allan Paivio)

According to Cognitive load theory (Sweller, 1988), there are three types of cognitive load on working memory.

Intrinsic load, corresponding to essential processing, is determined by the element interactivity or the complexity of the materials to be learned. The more interacting elements that need to be processed simultaneously, the higher the intrinsic load.

Germane load, stemming from germane or generative processing, is associated with processes that are directly relevant to learning such as scheme construction and automation.

While intrinsic load is generally thought to be immutable, instructional designers can manipulate extraneous and germane load. It is suggested that they limit extraneous load and promote germane load.

Minimizing cognitive load based on 13 Principles of the CTML

Mayer’s 13 principles can be categorized into three types of cognitive load such as extraneous, essential, and generative processing load in order to foster multimedia learning. 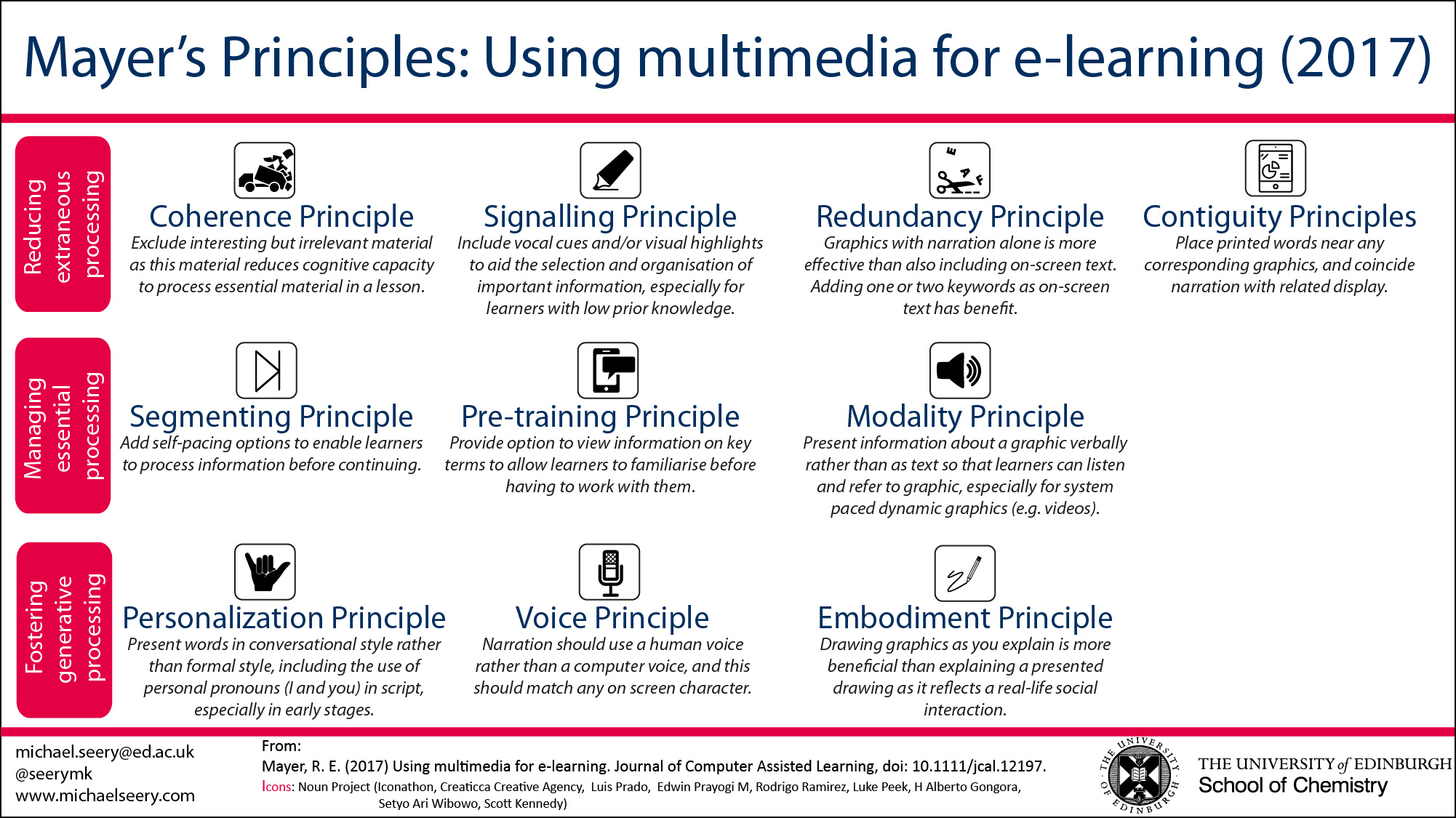 Instruction: In groups of 3-4, identify overloaded cognitive processes based on thirteen principles and discuss how to reduce the cognitive load of learners in each scenario applying 13 principles of the CTML.

A student views a narrated animation that explains the process of the lightning formation based on the strategies discussed in the scenario 1. However, the rich content is presented at a fast rate. By the time learner selects relevant words and pictures from one segment of the presentation, the next segment begins.

A student clicks on the entry for lightning in a multimedia encyclopedia, and he receives a narrated animation describing the steps in lightning formation along with background music or inserted narrated video clips of damage caused by lighting. In addition, the text is placed on the screen at the bottom of the screen and the corresponding graphics are placed toward the top of the screen.

The Magical Number Seven, Plus or Minus Two(April 3, 2018). Retrieved from https://en.wikipedia.org/wiki/The_Magical_Number_Seven,_Plus_or_Minus_Two

Back to Hana's porfolio