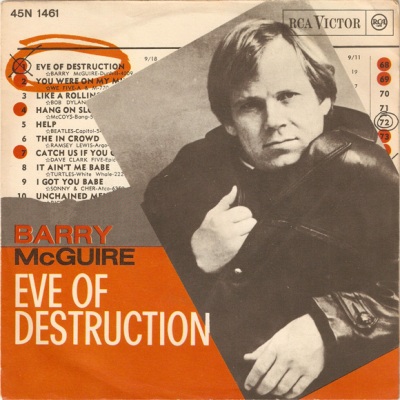 The need to bring history alive in middle school classrooms can be once a daunting challenge and an intriguing experience. In order to accomplish this goal, this mini-course demonstrates an innovative method of presenting 'cold' history by using a reasonable teaching medium -- the lyrics. Particularly, the reason of this lesson is to give an insight into the experience or feeling of the Vietnam war from the viewpoint of an protester. The lyric which is selected for instruction comes from the song "Eve of Destruction", written by P. F. Sloan and sung by Barry McGuire.

Song Used in This Lesson

Background of the Song

"Eve of Destruction" is a protest song written by P. F. Sloan in mid-1964. Several artists have recorded it, but the best-known recording was by Barry McGuire. This recording was made between July 12 and July 15, 1965 and released by Dunhill Records. The accompanying musicians were top-tier LA session players: P. F. Sloan on guitar, Hal Blaine (of Phil Spector's "Wrecking Crew") on drums, and Larry Knechtel on bass. The vocal track was thrown on as a rough mix and was not intended to be the final version, but a copy of the recording "leaked" out to a DJ, who began playing it. The song was an instant hit and as a result the more polished vocal track that was at first envisioned was never recorded.

McGuire also mentioned that "Eve of Destruction" was recorded in one take on a Thursday morning (from words scrawled on a crumpled piece of paper), and he got a call from the record company at 7:00 the following Monday morning, telling him to turn on the radio—his song was playing.

Lyric of the Song

The eastern world it tis explodin',
Violence flarin', bullets loadin',
You're old enough to kill but not for votin',
You don't believe in war, but what's that gun you're totin',
And even the Jordan river has bodies floatin',
But you tell me over and over and over again my friend,
Ah, you don't believe we're on the eve of destruction.

Don't you understand, what I'm trying to say?
And Can't you feel the fear that I'm feeling today?
If the button is pushed, there's no running away,
There'll be no one to save with the world in a grave,
Take a look around you, boy, it's bound to scare you, boy,
But you tell me over and over and over again my friend,
Ah, you don't believe we're on the eve of destruction.

Yeah, my blood's so mad, feels like coagulatin',
I'm sittin' here, just contemplatin',
I can't twist the truth, it knows no regulation,
Handful of Senators don't pass legislation,
And marches alone can't bring integration,
When human respect is disintegratin',
This whole crazy world is just too frustratin',
And you tell me over and over and over again my friend,
Ah, you don't believe we're on the eve of destruction.

Think of all the hate there is in Red China!
Then take a look around to Selma, Alabama!
Ah, you may leave here, for eight days in space,
But when your return, it's the same old place,
The poundin' of the drums, the pride and disgrace,
You can bury your dead, but don't leave a trace,
Hate your next door neighbor, but don't forget to say grace,
And you tell me over and over and over and over again my friend,
Ah, you don't believe we're on the eve of destruction.

Historical Events And Documentation Involved in the Song

Continue on to: Lesson 2: Teaching History of One Specific Place