Welcome to my portfolio page!

Check out my personal page: http://tccl.rit.albany.edu/knilt/index.php/User:Ejohnston

TRANSITIONING FROM PATCHWRITING TO EFFECTIVE PARAPHRASE

The topic of my mini-course will be helping students move from patchwriting, as originally described by Rebecca Moore Howard (1992), toward an authentic and individual voice as they paraphrase source material. According to The Citation Project (2013) (http://site.citationproject.net), patchwriting continues to plague student writing at the college level despite instructors’ attempts to teach students to use their own language. My mini-course will help college students assigned source-based writing projects to understand what constitutes patchwriting, how it is distinct from traditional plagiarism, and why they must learn to move beyond it in their writing.

NOTE FOR INSTRUCTORS ON USING THIS COURSE

This course is designed to be used by intructors in courses requiring source-based writing; instructors teaching upper-level high school English courses, college-level composition courses, or any college-level writing across the curriculum course may find this mini-course useful for students who struggle with patchwriting.

This course is flexible enough that it may be used as a stand-alone module, embedded into another module, or provided as a supplementary resource. Instructors planning to use this course can facilitate its delivery by embedding it into an LMS platform wherein students can participate in discussions and access collaborative writing tools (Google Docs, Wikis, TitanPad, etc). It can be used in an online class or in a face-to-face class with computer technology, such as a computer lab or a classroom with a smartboard.

Upon successful completion of this course, students will be able to:

Plagiarism has always been a problem in education; however, since the growth of the Internet, colleges have seen an unprecedented rise in plagiarized essays (Roig, 2001; Buranen and Roy, 2007; Howard, 2010; Rolfe, 2011; Bretag, 2013; Childers and Bruton 2016). Studies show that the most prominent form of plagiarism is patchwriting, an unintentional and ineffective attempt to paraphrase; in one study, 89% of the papers examined demonstrated some for of patchwriting (Howard, 2010).

Researchers have hypothesized a number of reasons why students plagiarize. Among the possible causes are: students' low reading skills (Roig, 2001; Howard, 2010); lack of clarity about what constitutes plagiarism (Roig, 1997, 2001; Howard, 2010; Childers and Bruton, 2016); failure of professors to teach how to paraphrase (Nilson, 2010); because students fear no significant repercussions (Nilson, 2010); because students feel pressure to get good grades (Slobogan, 2002; Bretag, 2013; Chace, 2012); and because they live in a culture which rewards short-cuts and devalues ethical behavior and the pursuit of knowledge for knowledge’s sake (Chace, 2012). In sum, the research suggests that students don’t fully understand how to avoid plagiarism and that they are likely not motivated to learn how to do so.

What Is to Be Learned

A number of researchers suggest that students need to be taught more explicitly about what constitutes plagiarism and how to avoid it (Belter & du Pré, 2007; Schuetze, 2004; WPA, “Defining,” 2014). At the same time, others argue instructors should spend more time teaching students how to paraphrase without plagiarizing (Barry, 2006; Landau, Druen, & Arcuri, 2002; Walker, 2008; Shi, 2008; Projaska, 2013; WPA, 2014). In response to these needs, this course will help students understand what constitutes patchwriting, why it occurs in college-level writing with such ubiquity, and how to avoid it by producing effective paraphrases.

ANALYSIS OF THE LEARNER AND CONTEXT

Students will include undergraduate students at any stage in their undergraduate path; however, this course will work best in a gateway writing and/or reading course and as an intervention in upper-level courses should students require it. It’s also possible that this course might be used in upper-division high school courses and/or developmental English courses. This course may be embedded into a learning platform like ANGEL or BlackBoard, so students should have some familiarity with Internet technology. Students will also need to know how to download apps like TitanPad, and should be open to working collaboratively with other students.

Students taking this course likely demonstrate the need for reading intervention. Research suggests US students entering college possess weak reading skills (Rogers 2013; OECD 2013). According to most recent studies, only 38% of Grade 12 US students test as “proficient” in reading (NAEP, 2013) and students entering college typically read at a 7th Grade Level (Vost, et. al, 2016). At the same time, both the Common Core and the Council of Writing Program Administrators recommend more source-based writing as essential to the Course Outcomes for First Year Writing (WPA, “Outcomes,” 2014), so it’s clear that students are being asked to engage more rigorously with texts than ever before. Students will need to be intrinsically motivated to learn how to avoid plagiarism since the extrinsic reward of a good grade might be more appealing (Nilson 2010). Students in this generation may believe that “cheating” is the norm and may not immediately recognize that patchwriting is unethical (Chace, 2012).

Students can be expected to read at a 9th grade level (Garrison 2011).

Students will participate in this course as either part of an instructor-led online course and/or as a web-enhancement to face-to-face class instruction. Students can expect to spend the equivalent of two dedicated weeks in a typical 15 week semester.

Exploring the Instructional Problem and Solution

Because the prevailing issue with patchwriting is divided between two essential causes--lack of understanding and lack of motivation--the course solution is to tackle both issues simultaneously. Throughout the course, students will be encouraged to practice cognitive and metacognitive skills, understanding the issue of patchwriting as a complex socio-cultural issue. Students will be encouraged to see themselves as part of the solution and will work collaboratively toward creating guidelines for best practices. The course will culminate in a task which demonstrates each individual student's motivation to avoid plagiarism and the knowledge with which to do it.

Goals of this Mini-Course

The overarching goal of this course is to motivate students to use sources effectively and ethically by engaging them metacognitively.

· Help students to understand why effective paraphrasing is worthwhile and relevant

· Help students to understand the common pitfalls that lead to patchwriting 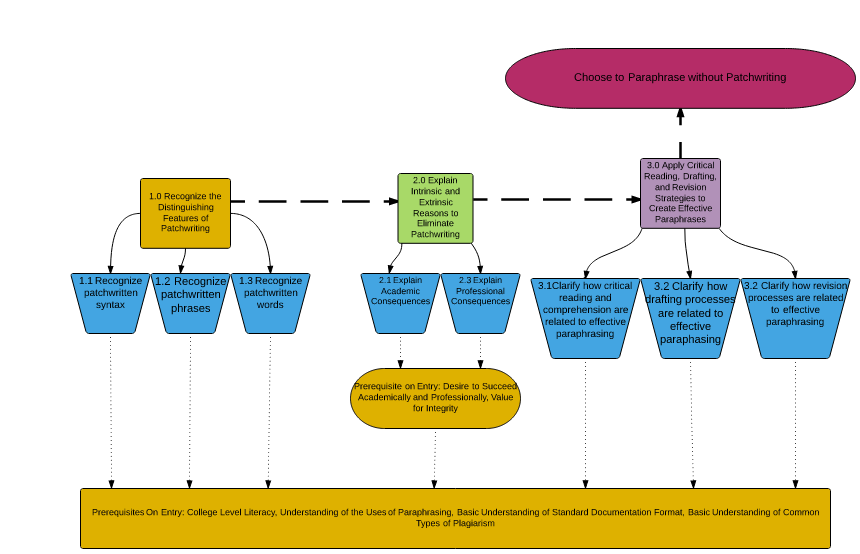 1. After reviewing literature on patchwriting and given sample paragraphs, the student will be able to recognize which ones include patchwriting and resolve errors with syntax, phrasing, and vocabulary use.

2. After reviewing literature on academic honesty, students will reflect in groups potential academic and professional consequences of patchwriting.