Unit 2: Getting to know the basic types of Chinese characters

In the following, there will be showing four pictures of the Hieroglyphic Chinese Characters which were created and used by ancient Chinese people, carefully look at them, related the prior knowledge to how Chinese Characters first come into being, and then guess the meaning of each Hieroglypic Character.

You can go back to Unit 1 to review the development of the Chinese Characters' procedure, and then put down your answers with the number 1 through 4 in the discussion space

And Now look at the chart which shows the correct meaning of those four characters and the detailed process of how each of them has evolved over the past thousands of years. 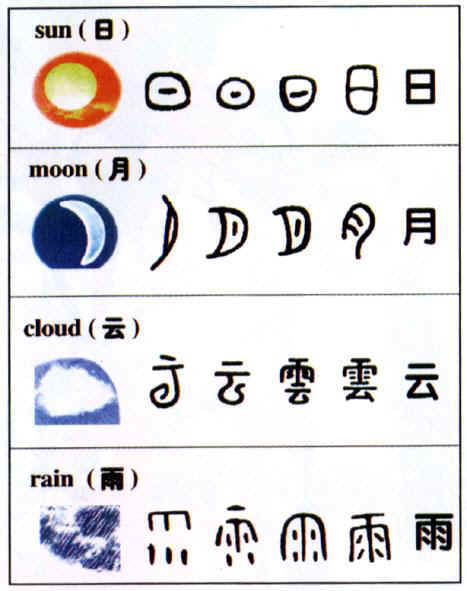 As the name of Pictogram Chinese Characters indicate, that those characters are originally used and created by ancient Chinese people who did not have the concepts of writing system at that time therefore they used simple picture-like labels as the indications of the meaning of concrete objects. Although pictograms occupy only a small portion of the Chinese characters, they are of the significant importance of being the basic foundation of the series of later evolvement and development of Chinese characters.

The modern Chinese characters have already been standardized, simplified and stylized to make them easier for read and write, therefore you can see that there might be very big difference between the root label and the current character, however, if you know clearly about how they have been changed during thousands of years, it is not only interesting to see their changing through time but also easier to remember their meanings.

It is not hard to see that the first pictograph has the meaning of a winding and floating river, while the second one indicates a bird. And with the basic understanding of the original meaning, now let us see the main changes had happened to those two characters in order to get a whole detailed concept of their evolvement through time.

(The last one is basically what it looks like nowadays in Modern Chinese.)

From the two different examples which are both belong to pictographic characters we can see that, 川’s form almost remains the same, while 鸟’s form is changed a lot at the different period.

Traditionally, learning how to write Chinese characters are nothing but to repeatly practicing them by writing them on draft sheets, however, now in this section, I want all of you to discover as much pictographic Chinese characters as possible, the first few examples and related webpages which you can use to find out a lot of information will be provided below, you will need to list their pinyin (the pronunciation of a Chinese character) and the meaning of a particular character first, and then post the different forms which had major changes through time, DO NOT post the repeated one, but you can definitely correct the mistakes if there is anything wrong with the existing ones.

By all the related resources you have got, now start to explore more and post your findings in the section DIY Time for Pictographic Characters

Is there any concrete objects we can use to describe the meaning of “above, beyond, or higher”? No, this is a ideological concepts which we need to use more complicated signs to describe it. Therefore, the ancient Chinese people came up with the idea that put down a short dot above a comparatively longer line to indicate the meaning of being above, beyond or higher than some other stuff.

Before we view the second example, we need to know its radical part which is a pictographic character at first:

The original one looks like a Chinese traditional sword or knife, which is long and usually carried by tying it beside one's waist. So what if we add a small dot on it, what does it mean then?

Do you get the meaning of this one? Right! It means the edge of any sharp stuff, sword or knife, particularly indicates knife, because this character comes into being based on the character 刀.

You will find a lot of very interesting ideogrammatic Chinese characters and how amazing they are of being contained the indication by combining different radicals together.
Please continue using the webpage resources you used to use in the previous section, you will still need to have the detailed information of each character you find, i.e. pronunciation, strokes order, meaning and forms in different stages, at last put your findings in the DIY Time for Ideographic Chinese Characters

These are too very simple pictographic characters, the first one means people or person (there are no plura form in Chinese.), and the second one means wood, and now let us see what happened when they were put together:

So what does it mean by a person leaning against a wood? Right! The answer is to have a rest.

Two people stay together? What does it mean? It means "to follow".

More and more woods together? The first 林 means usually a small forest, and the second 森 means a very big forest where full of trees.

Direction: So far you've known more and more different types of Chinese characters, use as many prior knowledge you have as possible, also never forget to use the online resources, and you will still need to have the detailed information of each character you find, i.e. pronunciation, strokes order, meaning and forms in different stages, at last put your findings in the DIY Time for Ideogrammatic Compond Chinese Characters.

In modern Chinese characters, phono-sementic compounds characters occupy the biggest portion among all, they can also be called semantic-phonetic compounds or pictophonetic compounds. As those names indicate, we know that these characters are mostly composed of two parts: one part represents the general meaning of a character and this part is usually a pictographic character, another part is an existing character pronounced approximately as the new target character.

Let us have a pictographic character as one part first:

This character means water from ancient time until now.

The other part "可" pronounces like "ke", and by putting "水" as another part indicating that the character has a semantic connection with wate, a new word which means "a small river" came into being with the pronunciation of "he" which sounds like the "可" part.

PAY ATTENTION here that always remember this type of character are consist of two part, only one part contains the meaning, and another part merely suggests the pronunciation.